How can we help you today?

Users can build various logics into their system at different stages, like during Survey creation, Sample Lists creation and monitoring and tracking a survey. The logic includes skip logic, Validation, Set value, Question/Option masking, filtering sample lists etc., which is done via the Logic Builder.

Let us consider an example of Logic builder that appears while applying Question masking. (Refer article Hiding question based on logic)

The Logic Builder opens up with AND condition by default and options to add rule where you can specify your logic.

A row will get added in your logic builder as below:-

The added row will contain four fields which has specific contents as below:-

For the example that we are considering, choose the option as “Survey”.

The entire fields combine together to create one logic based on which the results will be shown.

Click on the “+” Add Rule icon again to add another row/rule in your logic builder.

A new rule will be added below your previous rule. Define logic in your added rule and select between AND/OR conditions to be applied between the two rules.

After defining rules, click on SET to apply the logic.

Users can also create groups in Logic builder. Each group will have its respective set of rules. AND/OR condition can then be applied between Groups as well.

Click on the Add Group icon to add a group.

Group will get added.

Click on Add Rule icon to add rules to your group.

Follow and repeat the above steps to add multiple rules and groups to your Logic Builder.

Users can delete their rules and Groups by clicking on the “Delete” icon in the Logic Builder.

Users can Save/Load their created logic in Logic Builder and can later use them to apply in any other similar scenario.

Click on Save. A drop-down will appear. Enter the name for your Logic and click on save button. 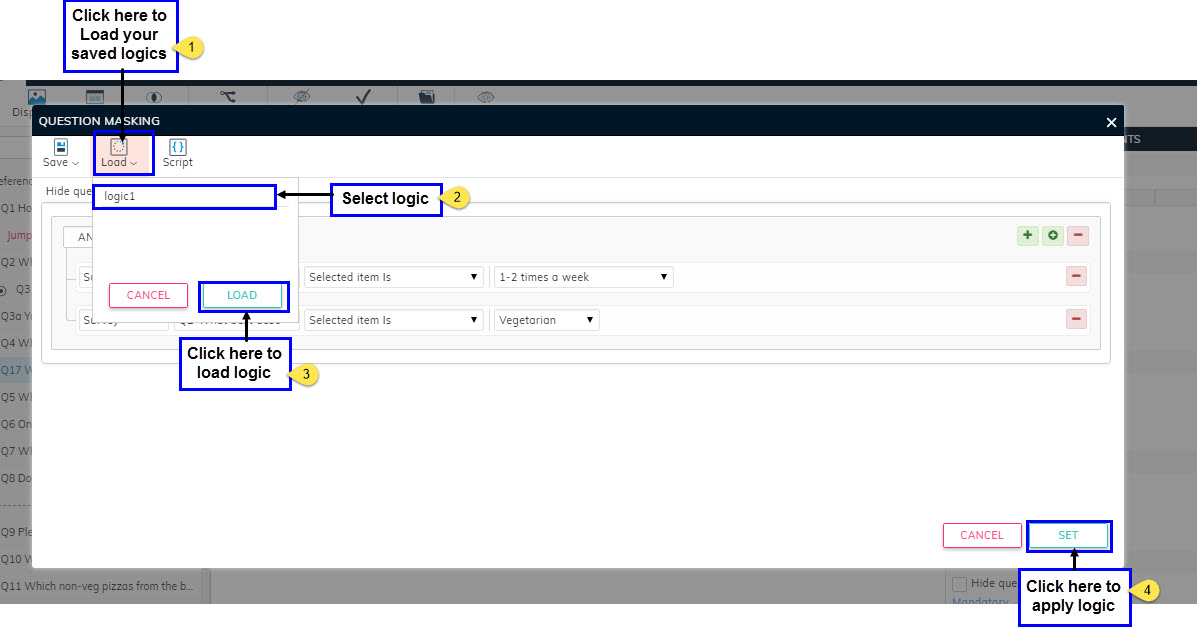 From the loaded list of saved logic, select the logic you wish to load and click on Set to apply the logic.

An automatic script will be generated where the users will define their logic. This script can be viewed by clicking on Script.

Instead of adding rules/groups, users can also write and apply the direct script if they have a good hand at scripting.

P
Punam is the author of this solution article.

Did you find it helpful? Yes No

Send feedback
Sorry we couldn't be helpful. Help us improve this article with your feedback.